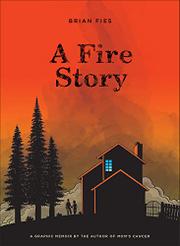 A new life and book arise from the ashes of a devastating California wildfire.

These days, it seems the fires will never end. They wreaked destruction over central California in the latter months of 2018, dominating headlines for weeks, barely a year after Fies (Whatever Happened to the World of Tomorrow?, 2009) lost nearly everything to the fires that raged through Northern California. The result is a vividly journalistic graphic narrative of resilience in the face of tragedy, an account of recent history that seems timely as ever. “A two-story house full of our lives was a two-foot heap of dead smoking ash,” writes the author about his first return to survey the damage. The matter-of-fact tone of the reportage makes some of the flights of creative imagination seem more extraordinary—particularly a nihilistic, two-page centerpiece of a psychological solar system in which “the fire is our black hole,” and “some veer too near and are drawn into despair, depression, divorce, even suicide,” while “others are gravitationally flung entirely out of our solar system to other cities or states, and never seen again.” Yet the stories that dominate the narrative are those of the survivors, who were part of the community and would be part of whatever community would be built to take its place across the charred landscape. Interspersed with the author’s own account are those from others, many retirees, some suffering from physical or mental afflictions. Each is rendered in a couple pages of text except one from a fellow cartoonist, who draws his own. The project began with an online comic when Fies did the only thing he could as his life was reduced to ash and rubble. More than 3 million readers saw it; this expanded version will hopefully extend its reach.

Drawings, words, and a few photos combine to convey the depth of a tragedy that would leave most people dumbstruck.