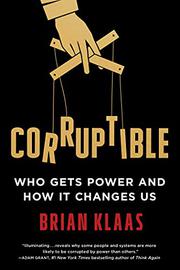 Who Gets Power and How It Changes Us

Brilliant study of the nature of power, explaining just why it so often renders those who hold it evil.

“Does power corrupt, or are corrupt people drawn to power?” So asks Klaas, a professor of global politics at University College London, at the outset of this absorbing survey. The answer is yes. The author delivers a provocative argument to support that claim, whether discussing the case of an African strongman who cannibalized his political enemies or the martinet president of a homeowners association. Two memorable examples come early: One is a “psychopathic pharmacist” who organized the survivors of a 1629 shipwreck on an Australian island to commit more than 100 murders at his whim. The second is a similar marooning, four centuries later, in which a group of young Tongan men lived for more than a year in a flatly organized shared-power-and-responsibility system. That all survived may have been a fluke given that we tend to create hierarchies in which “upstarts who would’ve previously faced ostracism, humiliation, or death now had a real prospect of becoming genuinely powerful.” Because power thrives on conflict, the rate of violence increases; because people fear violence, powerful people who offer security thrive. Hierarchy itself isn’t bad, writes Klaas; it’s just that it attracts corrupt people who flourish in competition. Today, “much of the world is dominated by systems that attract and promote corruptible people.” Some make no effort to disguise their corruption (Putin, Trump, etc.); others are more sophisticated. Is it nature or nurture? “We don’t know,” writes Klaas. The implications are far-reaching. For example, since police work attracts former soldiers who enjoy exercising power, real police reform will involve not hiring such people. To keep people from abusing power, those with power within a hierarchy must be rotated and kept an eye on, given that “watched people are nice people.”

Lord Acton would be proud. Essential for interpreting history and world events—both the provinces of tyrants—alike.