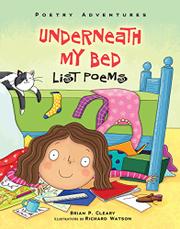 From the Poetry Adventures series

The sixth installment in the growing list of Poetry Adventures focuses on just that: lists.

Here Cleary and Watson present illustrated rhymed and unrhymed poems cataloging zany subjects ranging from wished-for delights to unsavory remnants moldering away in the school microwave or under one’s bed. Though one might expect the 16 poems collected here just to center on objects, like things that are “Yellow” or left “At the Lost and Found,” Cleary also provides inventories of what happens, for example, in April, at the bus stop, in the classroom, or at camp, inspiring children to observe not only things, but actions they encounter. He cleverly points to the irony of the “glove compartment” that contains nearly every household item except gloves and, in an especially hilarious poem, suggests that dinosaurs went extinct out of boredom and deprivation, due to their having “no skateboards, / … / no ice cream, / no smartphones, / no bicycles, / no french fries, / no amusement parks, / and / no Oreos.” Throughout, Cleary’s creative lists are animated by Watson’s light, vividly colored, and warmly drawn illustrations, spotlighting deliciously gory details like bug bites and scratches earned at camp or slimy, lime-green “snot” covering everything an allergy-plagued boy touches.

Whether capturing fun or chronicling items that disgust, Cleary and Watson again brilliantly open the world of verse, enticing young readers to dive in.