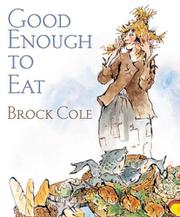 Like Larky Mavis (2001) but sans the metaphysics, this folklorish original tale gives a poor, scorned orphan a chance to show her inner stuff, and to make a fresh start. When an ogre—“Oh, he was a foul creature! His breath smelled of graves, and he had rats in his hair instead of lice”—appears at the town gates demanding a bride, the townsfolk dress the nameless beggar, sometimes dubbed “Scraps-and-Smells” or “Skin-and-Bones,” in a fine gown and a paper crown, and push her out. She turns out to be quicker of wit than anyone supposes, however, and by the time the ogre finally swallows her down, she’s acquired a sharp sword and a purse of gold—using the one to kill the monster and triumphantly carrying the other away as her reward, head held high. Cole writes in a beguiling mix of rhythmic prose and snatches of verse, paired to equally beguiling watercolor scenes of rumpled-looking figures in a medieval setting. Viewers who linger over the pictures will be rewarded with plenty of comical side details, but also come to appreciate the artist’s genius for conveying character through subtleties of posture and expression. Fine fare for reading alone or aloud. (Picture book. 7-9)