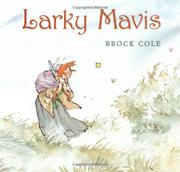 From the author of Buttons (2000) comes a simply told tale with deep emotional and metaphorical resonance. Town fool Larky Mavis, “mooning about, mooning about,” trips over peanuts in the road, one of which contains—well, what is it? A worm, opines the schoolmaster. A mouse, says the parson. Maybe a bat, sniffs the doctor. Calling it “Heart’s Delight,” and keeping it swaddled out of sight in ragged blankets until the end, Larky Mavis feeds it and carries it about, even as it grows to baby size and larger. With curling wisps of line and color, Cole depicts Mavis as an unkempt redhead living outdoors, caring for a trio of disheveled children as well as her Heart’s Delight as townsfolk in country dress look on with increasing unease. At last, when they try to relieve Larky Mavis of her burden, Heart’s Delight sprouts wings and carries her away. The story’s musical language and the whimsical, freely drawn art combine to keep the general tone light, but the characters, settings and events here, strongly reminiscent of Maurice Sendak’s We Are All in the Dumps with Jack and Guy (1993) though not so portentous, will leave sensitive readers moved and thoughtful. (Picture book. 8-10)