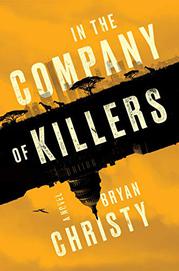 IN THE COMPANY OF KILLERS

Tom Klay is an American journalist in Kenya who writes about crimes against endangered species for the National Geographic–like magazine The Sovereign. Because of an earlier article he’d written, a ranger friend tells Klay, “everyone wants to see our famous elephant,” Kenya’s largest. That’s good for tourism, but now criminals want to kill the heavily protected animal and “smuggle his tusks to China whole.” Notorious poacher Ras Botha runs Africa’s ivory trade and considers elephants mere “property” to be hunted at will. “An elephant is carrying two gravestones,” Klay is told: “One for himself. One for his species.” Gravestones are needed for people as well, as Botha takes violent exception to human interference. Klay is a multilayered character who grew up in a funeral home and is well enough acquainted with death to muse that life is an unwinnable case and that “hope was certainty’s flirtatious cousin.” He tells his lover, the wonderfully named career South African prosecutor Hungry Khoza, that he’s not a good person because he’d caused a child’s death in Indonesia. His magazine’s editor-in-chief ropes Klay into moonlighting for the CIA. Then Perseus Group Media, a subsidiary of the “world’s biggest private military company” and China’s overseas security firm, buys out Klay’s financially struggling employer. By the way, China’s “Ultimate Silk Road Project” includes a planned highway through the heart of Kenya. There’s also a treasonous U.S. Navy admiral caught in a “little sex ring” and a pedophile ivory trafficker who is also a peace negotiator. The child sex trafficking theme might have been developed further or omitted altogether, but readers will sense its pervasiveness. The author’s experience as a special investigator for National Geographic informs this fast-moving debut novel.

High marks for this one. Let’s hope it’s the beginning of a long series.