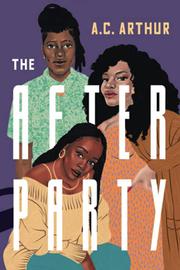 Three Black women who occasionally sit at the same lunch table at work are thrown together and become fast friends when their male colleague is murdered.

Venus McGee, Draya Carter, and Jackie Benson are all strong women who are leaders within their separate departments at Baltimore-based Billings Croft Construction, yet they couldn't be more different from one another. Venus is known as a calm and in-control senior project manager who has been passed over for promotions in favor of Rufus, an incompetent, petty, womanizing jerk; she holds herself accountable for every small choice she makes so that it does not reflect poorly on her father, a city councilman. Draya has a much different reputation: She asks no forgiveness for having slept her way into a job as the company's fiscal director, and she wields her sexuality as a tool to help get what she wants. Jackie, the third in the group, is the facilities manager at the firm’s building, a hard worker who is quick to defend boundaries and struggles with loneliness after her family shunned her for being a lesbian. When Venus gets into an argument with Rufus at the office Christmas party, the three woman head back to Venus’ apartment to commiserate on his extreme unpleasantness. The next morning, Rufus summons Draya frantically to his house for work help and she arrives to find him dead. As a Black woman in Baltimore, she does not trust what the police will do to her if she reports Rufus’ murder, so she calls Venus. What follows are a wild few weeks as the women try to protect themselves from the police investigation, figure out who murdered Rufus, and work through their opinions on potential, current, and former lovers as they become not only fast friends, but also family. This is Homicide: Life on the Streets meets 9 to 5 meets Bridgerton in a story that screams to become a TV series.