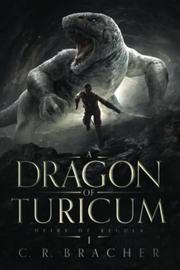 A prince vying for success in his father’s competitive kingdom sets out to slay a dragon in this fantasy adventure.

In the realm of Guaraci, 17-year-old Eldred is the son of King Alfred, ruler of the Deirans. He attends the Academy as a squire, where skilled young fighters eventually Bond with the Night Mother, a deity who bestows enhanced strength and speed. Eldred, however, is overdue to Bond, and Headmaster Tibbot thinks he probably never will. The teen is half Mercian, thanks to Queen Ghyslaine, and is relentlessly teased about his unusually tall stature. If he fails his trial at the Academy, Eldred won’t become a warrior and will disgrace the king. This pressure pushes Eldred to attempt to cheat his trial, which his father discovers. Meanwhile, a massive dragon has been attacking the Wretched, a conquered people from the north. Sammanus, one of the Wretched, arrives and begs Alfred for soldiers to help the city of Turicum kill the dragon. The king plans to send five Bonded warriors and five squires, including Eldred. Ghyslaine wants to spirit her son off to her Mercian homeland to become a lord in her brother’s court. Determined to be a full-fledged Deiran, Eldred refuses. But the challenges he’ll face alongside Alfred’s men in Turicum are complex and numerous. Bracher’s hero may be a teenager, but this series opener is not the typical YA fantasy. Eldred isn’t distracted by romance at the Academy or haunted by familial drama. The bone-deep tension that’s eventually revealed is that the Deirans are pugilistic xenophobes, possessed of a deadly hubris. Alfred tells Sammanus, “I will send an expedition of our finest to slay this beast, not out of any affection for the Wretcheds, but to prove our greatness.” Eldred befriends Sammanus and learns that the Sun People (as the Wretched call themselves) are more thoughtful, innovative, and caring than the Deirans. Bracher’s worldbuilding is engaging, but the novel’s first third, filled with militaristic unpleasantness, mars the launch. Eldred’s—and the series’—potential flowers by the finale.

An entertaining, if uneven, blend of fantasy action and soul-searching.