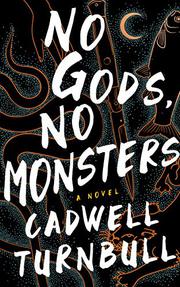 NO GODS, NO MONSTERS

In the first of a series, the monsters who have always lived among us emerge, endangered by prejudice, doubt, and at least one deadly, ancient cult.

Laina mourns the death of her estranged brother, Lincoln, lost to drug addiction and killed by a cop. Then a mysterious person sends her a video of the incident, which shows Lincoln transforming from wolf to man. When Laina tries to share the video online, the unedited version soon vanishes from the internet. Someone has revealed that animal shifters, witches, and other supernatural beings exist...but someone else seems dedicated to obscuring—or exterminating—that truth. As these so-called “monsters” consider the dangers of becoming more public, their allies must decide whether they, too, will take a stand and risk themselves as well. Calvin, a man with the power to move along the timeline of any parallel universe except his own, serves as a semiomniscient and flawed first-person witness to these events, even while greater powers observe him. As in Turnbull’s first novel, The Lesson (2019), the otherworldly aspects of the story act as a lens that brings the characters’ richly depicted lives and complex relationships into sharp focus. Despite her eldritch origins, it’s easy to sympathize with Sondra, a senator from St. Thomas and secret weredog, who longs for her missing parents and both loves and resents her adopted sister, Sonya, a blood-drinking and usually invisible creature hiding many secrets. The struggles of Laina’s girlfriend, Rebecca, a werewolf who has faced many losses and made many mistakes, are absorbing, as are the struggles of Laina’s husband, Ridley, an asexual trans man yearning for his parents’ approval even as he devotes himself to improving society through cooperative enterprise.

This is a deeply human story, beautifully and compellingly told.