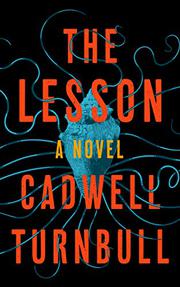 Sometimes the aliens don’t land in New York or London.

In fact, the alien Ynaa ship that catalyzes the emotional landscape and drives the action of this debut novel lands in the harbor of Water Island , one of the U.S. Virgin Islands. The Ynaa are decidedly a mixed bag, as aliens go: They don’t intend to conquer, just to stay for a while to do some unspecified research. In return, they give humans advances in medicine and other technology. The downside is that the Ynaa, who nearly appear to be human but are far stronger, live by a code of survival above all things and return any violence or even perceived violence done to them with more excessive violence, which the governments of the world decline to pursue legally. Five years after the landing, many islanders are unhappy about the occasional dog ripped in half and young man’s neck snapped. Moreover, the Ynaa are being less than forthcoming: The Ynaa ambassador, Mera, has been here far longer than most humans know. But that time has done more to damage her relationship with the Ynaa than with humanity; her intimate contacts with humans and the brutality she witnessed centuries ago when she posed as a slave have caused her to question both her people’s way of life and their mysterious mission. Her struggle to reconcile her origins with her experiences and present circumstances is mirrored by several humans on the island—including Shawn, the angry brother of a boy killed by the Ynaa; Patrice, a young woman who went to the mainland U.S. for college but has returned pregnant; her ex-boyfriend Derrick, dubbed a traitor for his job working for Mera; and Derrick’s grandmother Henrietta who refuses a Ynaa treatment for her cancer. All of them must come to their own conclusions, for good or for ill, as all of Water Island moves toward a final, explosive confrontation.

A persuasively—almost musically—worded meditation on colonialism and whether it’s really possible to return home again.