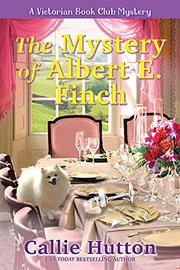 THE MYSTERY OF ALBERT E. FINCH

Wedding bells may ring for Lady Amy Lovell and William, Viscount Wethington, but their honeymoon falls prey to an ill-timed murder.

After a decorously paced courtship, the happy couple are ready to tie the knot in September 1891. As Amy ruefully observes, however, “It was a tad hard to accept good wishes when there was a dead body sitting at her wedding breakfast.”  The inconvenient victim is Alice Finch, whose champagne has been fortified with an overdose of belladonna. The obvious suspect is her husband and heir, Amy’s cousin-in-law Albert E. Finch. So convinced are detectives Edwin Marsh and Ralph Carson of the Bath Police Department that Finch has killed his wife that they quickly arrest him. Amy, already incensed that she and William will have to postpone their honeymoon trip to Brighton Beach, is even more outraged when the police release Albert to the custody of William and her, whom they’ve already forbidden to nose around in the case themselves, giving them an even more urgent reason to solve the mystery. Accidental damage to the roof of their own home brings her father, the Marquess of Winchester, and her beloved Aunt Margaret into the newlyweds’ establishment at the same awkward time, and the uneasy community is rattled by the disappearance of Othello, the bird Aunt Margaret has taught to declaim Shakespeare, and the discovery of another body. “I never faint,”  insists Amy after each of her entirely justified fainting spells, and this time she’s no more successful at sleuthing than the officials who warn her off—though she and William do get the privilege of hearing the killer’s confession before anyone else.

Less mystery than elephantine jockeying for the perks every aristocrat feels due.