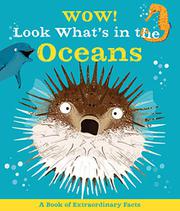 WOW! LOOK WHAT BUGS CAN DO!

From the Wow! series

The initial double-page spread is a bright, grassy green. A large black headline announces “The bug club.” Directly beneath it, in smaller black lettering: “Step into the exciting world of mini-beasts! Don’t be afraid!” Large, colorful, semicomical renditions of several insects—and a lizard whose tongue is trying to catch a fly—are scattered across the pages, accompanied by blocks of text that give a few facts about cicadas, rhinoceros beetles, peacock butterflies, tiger beetles, and ants. More text is included in two opaque circles of contrasting colors, each with the headline, “Wow!” Each succeeding double-page spread uses a similar layout, producing in readers the opposite effect of a bedtime story. The categories include legs, homes, camouflage, unusual survival skills, and more. On several occasions, the text cleverly adds buglike meanings to well-known sayings. Although the colorful busy-ness and overabundance of exclamation marks would suggest a preschool audience, an abundance of text and compound sentences makes it more appropriate for older readers who don’t mind hype. Their reward: plenty of cool and/or gross facts with which to impress others. Hopefully, young readers will read all the way to the ending’s reminder of the importance of bugs to our planet. Companion title Wow! Look What’s in the Oceans publishes simultaneously and with similar effect.