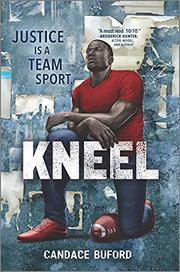 NFL quarterback Colin Kaepernick captured the world’s attention by kneeling during the national anthem to bring attention to police brutality against Black Americans. His courageous actions, which resulted in his expulsion from professional football, galvanized a generation of Black athletes to use athletic platforms to spotlight social injustice. This novel draws on this context to weave a tale about two up-and-coming Black high school football players trying to make the most of their final season and escape the harsh realities of their hometown lives. Russell is the Jackson High Jaguars’ formidable tight end, unstoppable when paired with his best friend and game-changing quarterback, Marion. Yet, when White players from well-off rival Westmond incite a fight during a game using racial epithets, Marion must deal with the unjust consequences of biased policing that not only land him off the team, but possibly in jail. Even worse, one of the officers involved was reassigned following the unprosecuted police murder of a Black boy in nearby Shreveport. For Gabby, Russell’s love interest and self-proclaimed intersectional feminist, this requires a courageous stand—but facing up to injustice brings unforeseen consequences; readers must navigate the complex ethics that inform a principled activist stance. Debut author Buford delivers a novel that bridges the mighty dreams of Last Chance Uwith the trenchant social critique of The Hate U Give.

Sports’ biggest social movement moment of the decade gets a special homage.