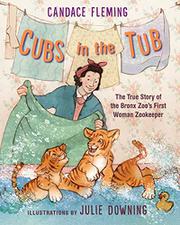 CUBS IN THE TUB

The True Story of the Bronx Zoo's First Woman Zookeeper

In the 1940s, Fred Martini, a zookeeper at the Bronx Zoo, brought a newborn lion cub home to his wife.

The cub had been rejected by its mother and desperately needed care. Though childless, Helen was well prepared with baby supplies on hand. She bathed it, fed it baby formula, and sang it to sleep. MacArthur became a loving, playful, cuddly pet until he was placed in another zoo. It was lonely without him until Fred brought home three baby tigers, and the joyful process began again. When it was time to return these babies to the zoo, Helen went with them. She created a cozy space in a glass cage where visitors could see them. She expanded her work by establishing a nursery in an unused storeroom, painting and decorating, curtains and all, where the tiger cubs could sleep at night. When zoo officials finally discovered her, they realized the value of what she had accomplished and offered her a permanent, paid position as the first woman zookeeper, caring for many species of animal babies. Telling the tale with great attention to detail, Fleming perfectly captures both time and place as well as the loving, determined woman who forged her way in a man’s profession. Downing’s illustrations in a wide variety of sizes and hues will keep readers’ attention glued to the pages and are in sync with the text in every way. The Martinis present white, and the animals are cuddly and packed with personality.

A lovely homage to a little-known woman and her quiet achievement.