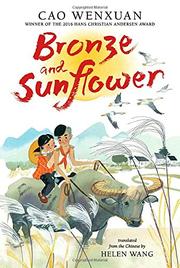 by Cao Wenxuan ; translated by Helen Wang ; illustrated by Meilo So

Set during China’s Cultural Revolution (1960s-70s), this import follows the trials and tribulations of a poor, rural family.

Sunflower accompanies her artist father to the countryside, where he undergoes political reform at a labor camp. Left on her own for most of the day, Sunflower longs to play with the village children across the river. When her father tragically drowns, Sunflower is taken in by Bronze’s family, the poorest family in Damaidi village. Bronze, who is mute, and Sunflower form an instant bond and become inseparable. In Wang’s translation of his leisurely, languid prose, Hans Christian Andersen winner Cao captures both the infinite joys and harsh realities of rural farming life: Sunflower and Bronze picking wild plants or catching fish; the family’s struggle to rebuild their house after a storm. Yet despite their adversities, the close-knit family members remain fiercely loyal: Bronze hoists Sunflower on his shoulders and stands for hours so she can watch a circus; Sunflower deliberately fails her exams so the money for her schooling can be used for Nainai’s medical expenses. Eventually, the family makes the ultimate sacrifice but does it with the same grace and resolute strength they’ve demonstrated throughout the story. While seemingly idealized, the story and its protagonists reflect the Confucian values of filial piety and society above self—the very foundation of Chinese culture.

Readers of all ages should be prepared to laugh, cry, and sigh with satisfaction.