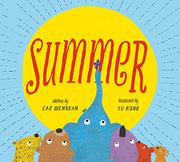 In the spirit of Aesop, the 2016 Hans Christian Andersen winner weaves an animal fable set in the grasslands.

Seven creatures are desperate for relief from the sweltering sun. After they argue and vie for a spot under the single tree, the elephant muscles his way underneath. The sight of the giant trying to cool off under several tiny leaves is so hilarious the animals burst into laughter. Their attention is diverted by the sight of a child walking by in his father’s shadow. In a brilliant design feature, the next six pages are cut to gradually increase in width, moving from 3 ½ inches to 10 inches, as each creature, starting with the lynx, crosses the gutter to offer shade to smaller beings. Yu cleverly contrasts a lineup of wilting figures rendered in pencil on the verso with smiling, colorful, cut-paper versions on subsequent rectos. Before the page turns, viewers can spot a silhouetted portion of the next animal’s shadow, setting up a guessing game. Ultimately, a natural solution offers coolness for all. Touches of internal rhyme, alliteration, foreshadowing, and descriptive specificity elevate the telling: “Hens doze in the dusty shade of haystacks, and the melon farmer fans himself, under a canopy.” As in fables of yesteryear, Cao holds a mirror to selfishness as well as to an individual’s ability to transcend that tendency.

Children will return often to enjoy the interactive opportunities and the harmony that prevails.