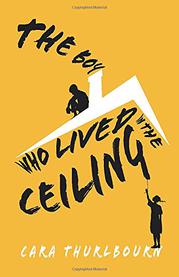 THE BOY WHO LIVED IN THE CEILING

In Thurlbourn’s YA novel, a homeless boy and a lonely girl become unlikely companions when she discovers that he’s been secretly living in her attic.

When teenage Freddie first enters the Johnson family’s home, it’s only because they’ve left their door ajar after going on vacation, and he means to close it after coming inside for a moment to warm up. However, desperation makes him stay longer. Abandoned by his parents and without other support, Freddie realizes that having a place to shower, sleep, and wash his clothes could give him the leg up he needs to get out of poverty. Things go awry, though, when the Johnsons return home unexpectedly, and Freddie hastily hides himself in their attic. He reluctantly decides to continue to live there and to eventually slip away after he’s saved up enough money. In the process, he becomes aware of the Johnson family’s many troubles, including the fact that teenage daughter Violet’s transfer to a new school has made her a target of bullying. Later, Freddie reveals himself when he saves Violet from an attempted assault by one of her classmates. Against all odds, she agrees to keep his secret, and the two form an unlikely bond. But as they grow closer, it becomes clear that there are secrets in Freddie’s past that could end their relationship before it truly begins. Thurlbourn does an exceptional job of taking an unnerving premise and spinning it into a lovely story about compassion and self-acceptance. Throughout, the author explores Freddie’s and Violet’s inner lives, giving their struggles shape and nuance, and portrays Freddie’s situation with grace and sensitivity. Despite the presence of a few genre clichés (such as a shallow friend-turned-bully), the narrative never feels trite or contrived. It also thoughtfully touches on everyday realities of unhoused people in a realistic way: “He’d written about his nights wandering town because he had nowhere to sleep and moving was better than staying still”; “It was the most he’d spoken in so long that he felt a little breathless.” It’s a sincere story with likable protagonists that balances romance, suspense, sorrow, and humor.

A heartfelt, charming coming-of-age story with a strong message.