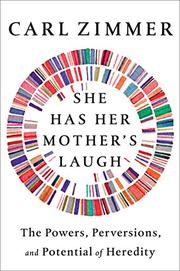 SHE HAS HER MOTHER'S LAUGH

The Powers, Perversions, and Potential of Heredity

A fascinating journey through the history of heredity.

Books on the current revolution in genetics are not in short supply, so New York Times columnist Zimmer (Science Writing/Yale Univ.; A Planet of Viruses, 2011, etc.) casts his net more widely in a delightful history of efforts to discover why offspring resemble their parents but sometimes don’t and how scientists are learning how to change matters. “Very often genes cannot give us what we really want from heredity,” he writes. “Each of us carries an amalgam of fragments of DNA, stitched together from some of our many ancestors.” As a journalist, the author believes that readers want to hear a story through the eyes of an individual, so he chooses one: himself. After having his genome sequenced, he showed the results to researchers so that they could interpret them. It turns out that he carries genes for two serious diseases; luckily, his wife does not. Zimmer shares many identical genes with a typical Nigerian and typical Chinese person. In case readers are in doubt, every expert agrees that genetics disproves the existence of traditional races. The inheritance of intelligence has made impressive progress despite no agreement on a definition. Though IQ tests don’t measure it, per se, they do measure something worth having. People with a high IQ do better in life and live longer. Zimmer does not ignore famous historical oddities such as the Elephant Man, but he pays more attention to how humans inherit common diseases, height, skin color, aging, intelligence, and other traits. It’s a search that begins with hokum—Jews were once considered disease-prone and unintelligent—and ends with captivating knowledge. A brief glossary will help readers with such terms as “endosymbiont” and “pluripotent.”