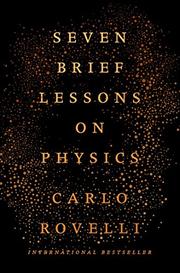 Italian theoretical physicist Rovelli (General Relativity: The Most Beautiful of Theories, 2015, etc.) shares his thoughts on the broader scientific and philosophical implications of the great revolution that has taken place over the past century.

These seven lessons, which first appeared as articles in the Sunday supplement of the Italian newspaper Sole 24 Ore, are addressed to readers with little knowledge of physics. In less than 100 pages, the author, who teaches physics in both France and the United States, cogently covers the great accomplishments of the past and the open questions still baffling physicists today. In the first lesson, he focuses on Einstein's theory of general relativity. He describes Einstein's recognition that gravity "is not diffused through space [but] is that space itself" as "a stroke of pure genius." In the second lesson, Rovelli deals with the puzzling features of quantum physics that challenge our picture of reality. In the remaining sections, the author introduces the constant fluctuations of atoms, the granular nature of space, and more. "It is hardly surprising that there are more things in heaven and earth, dear reader, than have been dreamed of in our philosophy—or in our physics,” he writes. Rovelli also discusses the issues raised in loop quantum gravity, a theory that he co-developed. These issues lead to his extraordinary claim that the passage of time is not fundamental but rather derived from the granular nature of space. The author suggests that there have been two separate pathways throughout human history: mythology and the accumulation of knowledge through observation. He believes that scientists today share the same curiosity about nature exhibited by early man.

An intriguing meditation on the nature of the universe and our attempts to understand it that should appeal to both scientists and general readers.