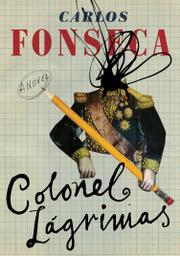 No one writes to the Colonel, and so the Colonel must write for himself: debut novelist Fonseca looks to the golden age of Latin American literature while pondering the mysteries of mathematics.

More to the point, Fonseca, who teaches at Cambridge, limns the mysterious life of the enigmatic mathematician Alexander Grothendieck, who, stateless, settled in the foothills of the French Pyrenees and filled thousands of pages with formulas, jottings, and diary entries. In Fonseca’s hands, this untidy, seemingly random archive becomes something of an alternative history of “an imploding century,” a time in which our erstwhile mathematician, a “monastic aristocrat” who answers to Colonel for reasons unknown, has seen manifold terrors, from the Spanish Civil War to Vietnam. The Colonel, for whom the adjectives mount in variety and number as the story progresses, nurses memories and perhaps a few hallucinations. Though the narrative centers closely on him, he is not alone: among other characters, there is an elusive refugee named Chana Abramov, whose monomania is to paint landscape after landscape of a volcano that she once populated with humans, then erased them one by one. Then there is pen pal Maximiliano Cienfuegos, who, having once played a game of chess with the Colonel, now receives packages from him for reasons unknown; “perhaps the colonel believed he heard aristocratic echoes in Maximiliano’s name,” writes Fonseca, “the irony of a name that played with a history, now almost forgotten, of impossible emperors and transatlantic projects.” Readers without groundings in Latin America will know little of that history, which, Fonseca’s novel insists, is fully part of the larger history of the world. Though the novel nods mostly to García Márquez, Fonseca plays with the possibilities of hypertext raised by Julio Cortázar, and there are hints of Bolaño and perhaps even of younger contemporary Daniel Galera (the latter in the Colonel’s diagnosis of prosopagnosia).

Sometimes precious and perhaps a little too short to contain all the author’s ambitions. Still, a lively, smart study of a decidedly offbeat character.