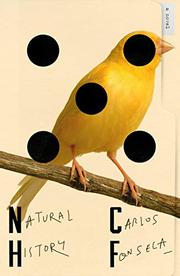 As in Colonel Lágrimas (2016), Fonseca populates his latest novel with smart people who don’t always behave as intelligently as they might. The narrator is a museum curator (whence the title) obsessed with the five-pointed shape called the quincunx, which figures in the wing patterns of certain tropical butterflies. An article he has written for a British natural history journal catches the attention of a beguiling, beautiful fashion designer who works against type: If some think fashion is meant to call attention to oneself, she is a believer in “the art of anonymity in the jungle.” In various aspects of her orbit stands an odd constellation of characters: a woman who seeds the press with learned, utterly false stories that, to her delight, cause people to freak out and markets to plunge; an Israeli traveler who shelters a secret; a photographer who is drawn into the darkest recesses of the Earth to find his subjects. Throughout, as with that earlier novel, Fonseca takes the occasion to venture odd connections and prolegomena for future projects; one of his characters, for instance, insists that the novel has been stagnant since the time of Cervantes and needs to be reimagined so that it becomes geological, “novels of multiple layers, novels that could be read the way you read the passage of time on the surface of rocks.” Everything is contingent in Fonseca’s story, and nothing is quite to be trusted; as it draws to a close, Fonseca begins to play with stories within the story, marvelous concoctions of, for instance, “an odyssey that gradually stretches out, from motel to motel, train station to train station, that grows in leaps and bounds, like the man’s conviction.” The novel is an elegant meditation on art, inconstancy, and hiding, with a deftly woven subtext of camouflage that emerges as the narrative progresses.

A treat for fans of Cortázar, Bolaño, and other adepts of the literary enigma.