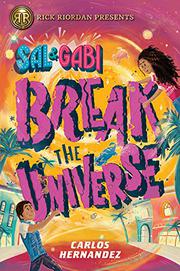 From the Sal and Gabi series, volume 1

Salvador Vidón is the new kid at Miami’s magnet school Culeco Academy of the Arts, but being at a special school doesn’t protect Sal from trouble.

Bullies are everywhere, but seventh-grader Sal knows just how to handle a difficult kid like Yasmany Robles. Obviously, you deal with a bully by opening a portal into another universe, taking a raw chicken from it, and planting it in the bully’s locker. But you cannot just go opening portals into other universes without some consequences. For one, Sal gets sent to the principal on only his third day at Culeco and in the process meets Gabi Reál, who isn’t buying Sal’s innocent-magician act. The more pressing issue is that when Sal opens portals, sometimes his deceased mother comes through from alternate universes where she still exists—Mami Muerta, in Sal’s words. But if you could bring your dead mother back, wouldn’t you? The story moves quickly, with lots of multiverse traffic, school hijinks, and strong, smart, diverse characters. Most are Cuban-American in various shades of brown, like Sal, Gabi, and Yasmany, and Hernandez effortlessly folds in multiple intersectionalities, including Sal’s diabetes and Gabi’s unusual, delightfully matter-of-fact family structure. Secondary characters receive as much care and love as the primary cast, and readers will find themselves laughing out loud and rooting for Sal, Gabi, and even Yasmany until the very end.

This book, drenched in Cuban Spanish and personality, is a breath of fresh air.