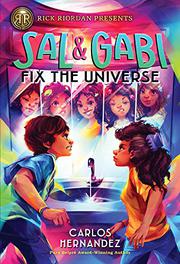 From the Sal and Gabi series, volume 2

The continued multiverse adventures of Sal Vidón and Gabi Reál.

It’s been three weeks since Sal and Gabi saved the life of Gabi’s newborn brother, Iggy, and everything seems to be back to normal—or at least as normal as possible with a potentially broken universe. Then Sal’s calamity-physicist father and Gabi’s Dad: The Final Frontier finish work on their remembranation machine, which they hope will fix the holes in the universe created in the Pura Belpré–winning Sal and Gabi Break the Universe (2019)—but has become sentient artificial intelligence in the process. As if that were not enough, Sal’s unlikely new friend, Yasmany, seems to have gone missing, and a Gabi from another universe shows up to warn Sal that Papi’s research has destroyed her world and killed her own Sal and that they must stop his version of Papi from doing the same. This excellent sequel features nonstop multiverse hijinks, great comedy, and heartening moments that are skillfully interwoven with a subplot that features a delightfully surreal student production of Alice in Wonderland—er, “Alicia” in “el pais de las maravillas.” The supporting cast includes a plethora of nurturing adults as well as amusingly melodramatic AI’s. Most characters are Cuban American, and Hernandez continues to effortlessly incorporate intersectionalities, including Gabi’s loving polyamorous family and Sal’s Type 1 diabetes and his aromantic identity.