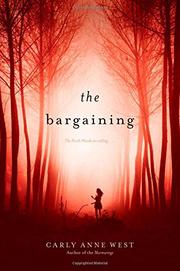 As far as Penny can tell, neither her father nor her mother wants her around, especially after the death of Penny's manipulative former friend, Rae. April, her father's much-younger second wife, takes Penny to live in the Carver House for the summer, hoping that renovating it together will bring the two of them closer. Two things, however, quickly become clear: First, the house will be almost impossible to repair, and second, the house is haunted. Spooky descriptions of ghostly voices, subtly changing paintings and children-turned-monsters are some of the book's most effective elements. The haunting is also astutely connected to Penny's emotional landscape. The Carver House children and the dead Rae visit Penny as ghosts, but Penny is equally haunted by the loss of Rae and her own perceived role in it. Less effective is the book's pacing; information about Rae's death and the Carver House's tragic history are revealed frustratingly slowly, and it's hard to understand why neither Penny nor April ever questions the locals about their extreme responses to learning where the two of them are staying.

It’s uneven, but it rewards patient readers with both frightening action and emotional insight.