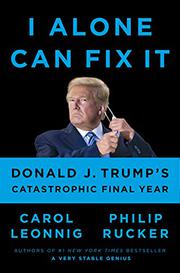 I ALONE CAN FIX IT

A hard-hitting exposé of the last year of the Trump regime packed with appalling revelations.

This book, write Washington Post reporters Leonnig and Rucker in their sequel to A Very Stable Genius (2020), recounts “how Trump stress-tested the republic, twisting the country’s institutions for personal gain and then pushing his followers too far.” Maundering, bloviating, and always enraged, Trump stalked the halls of the White House, bewildered to find that he could not explain away the pandemic with his spewing flood of misinformation. He was further enraged to find that the voters were not willing to overlook the “abject failure” that he personifies. In perhaps the most newsworthy moments of this newsworthy book, Trump plots to engineer a de facto coup d'état that will keep him in power. His one firm check is the book’s hero, Gen. Mark Milley, chairman of the Joint Chiefs of Staff, who told his lieutenants at the Pentagon, “They may try, but they’re not going to fucking succeed….You can’t do this without the military….We’re the guys with the guns.” Perhaps surprisingly, Melania and Ivanka Trump emerge as adults in the room, as well, even if a former Trump adviser characterizes the latter as a “stable pony”: “When a racehorse gets too agitated, you bring the stable pony in to calm him down.” In a carefully structured narrative that goes from bad to worse, the authors portray Trump as fully self-satisfied as the Jan. 6 insurrection was taking place, enacted by people whom Milley describes as “the same people we fought in World War II.” To trust this account, Milley almost singlehandedly averted the unprecedented assault on democracy. In a plaintive yet characteristically blustering interview with the authors after Joe Biden’s inauguration, Trump continued to insist that he won the election even while moaning that were it not for the pandemic, he could have beaten a ticket made up of George Washington and Abraham Lincoln.

A whirlwind of a book, full of Trumpian sound and fury—and plenty of news.