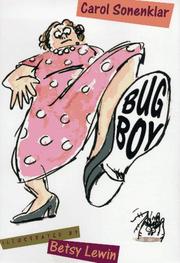 A charming fantasy that's easy to read, about a third-grade boy—Charlie—whose passion for insects has earned him the nickname ``Bug Boy.'' Charlie discovers that the Bug-a-View magnifier he's been given will turn him into any insect he places in the viewer. After turning into a spider and grasshopper, and nearly getting stuck as a fly permanently, he decides it is too dangerous to use. But when he loses a friend's valuable bombardier beetle at school, he turns himself into a spider to find it. Turning into an insect is a fantasy that children will find unusual and thrilling, and this one has a plot that fairly rockets along. Laced with humor and entomological details, this is perfect for reluctant readers, and for reading aloud. Lewin's black-and-white illustrations fit the story nicely, although Charlie's appearance fluctuates and he sometimes looks too young. Funny, buggy, fact- filled—readers will be clamoring for more. (Fiction. 8-11)