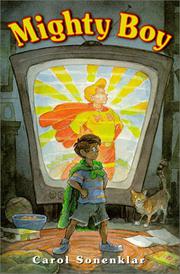 PLB 0-531-33203-9 A silly, but ultimately satisfying story of wish-fulfillment, in which Sonenklar (My Own Worst Enemy, p. 727, etc.) perfectly captures a middle grader’s obsession with fantasy heroes. Small for his age, often bullied, new kid Howard is thrilled when he wins a contest to attend a taping of his favorite TV show, “Mighty Boy.” Even though he knows that Mighty Boy is played by an actor, Howard is nevertheless shocked to find that the actor has none of the hero’s qualities. When the two boys get lost in the woods, Howard’s camping skills, learned from his father entirely offstage, save the day. Sonenklar is deft in limning Howard’s preoccupation with Mighty Boy: he dreams about him at night, daydreams during class, and, even in the presence of the (and initially not very nice) boy, can’t quite grasp the idea that none of it is real. The dangerous way Howard deals with the bully when he returns to school (he smacks a beehive so that the bees attack his tormentor) lacks any sort of warning; otherwise this is a funny and enjoyable novel. (Fiction. 8-12)