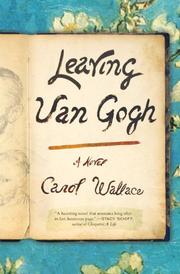 Wallace, who has written 20 mostly humorous or lightweight books since she co-authored The Official Preppy Handbook (1980), enters the realm of historical fiction with this novel about Vincent van Gogh.

Like Alyson Richman in The Last Van Gogh (2006), Wallace concentrates on the artist’s last days and his involvement with the family of Dr. Gachet. The basic facts are known: Van Gogh spent his last 70 days in Auvers painting a huge number of works before he shot himself; while in Auvers he spent considerable time with Gachet, a widower with two children, Marguerite and Paul. While Richman focused on Vincent’s relationship with Gachet’s daughter Marguerite—whose portrait he painted as well as Gachet’s—Wallace has Gachet narrate. According to him, he has always befriended painters, amassing an impressive collection of impressionist paintings, and dabbles in painting and etching himself. Vincent’s brother Theo, who supports Vincent, employs Gachet to watch over the artist. Gachet quickly recognizes the brilliance of Vincent’s work. When Vincent’s erratic behavior flares, Gachet suggests a “cordial” to soothe him, but Vincent tells Gachet that he must paint to keep sane. Both Marguerite and Paul grow obsessed with Vincent and follow him around. Vincent thinks of Marguerite only as a subject to paint. He becomes furious at Paul when Paul’s dog destroys one of his paintings. After Theo comes to visit with his wife and baby, Gachet realizes he has advanced syphilis. But Theo’s financial responsibility to his family drives him to keep working as an art dealer even as his health declines. Learning of Theo’s condition, Vincent becomes unable to paint. Without painting he has no wish to live. Gachet, still guilty that he refused his consumptive wife’s plea to help her die years earlier, decides to help Vincent by leaving his loaded gun where Vincent will find it.

The drama is muted, but van Gogh’s mix of genius and madness continues to fascinate.