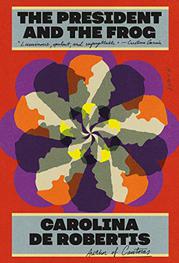 THE PRESIDENT AND THE FROG

A former Latin American president reminisces on his remarkable life.

In Kirkus Prize finalist De Robertis’ new novel, the unnamed former president of a Latin American country is interviewed by a journalist. Inspired by the life of José Mujica, the former president of Uruguay, the novel’s 82-year-old protagonist—affectionately dubbed the “Poorest President in the World”—lives in a humble home with his wife and dogs and tends his infamous garden. As he sits down with the Norwegian interviewer, the former president finds himself drawn to her and wonders if he should share the deepest secret of his life, which he dubs “the story of the frog.” The narrative oscillates between the present-day interview (set shortly after the 2016 U.S. election) and memories of his past. A former guerrilla and revolutionary, he spent years of his life as a political prisoner in solitary confinement. Kept in a deep underground hole, the former president endured unspeakable torture and struggled to mentally persevere through the isolation. Unwilling to let the dictatorship win, he fought the urge to retreat from reality: “Every time temptation slunk toward him, he found himself rattled by and yet.” Just when he feels on the edge, a raucous frog appears in his cell begging to hear his memories (“I want stories. Want to eat your stories”). Reluctantly, the protagonist tells the frog about his past, including losing his father, learning to garden, falling in love, and organizing a revolution. In stunning, cleareyed prose, De Robertis writes beautifully about storytelling, justice, and hope amid brutality. In one particularly moving section, the protagonist tells the frog about the youth-led revolution born from a dream of justice. They wonder what their beloved country, on the verge of a dictatorship, could be if it was remade in a new image: “What if, what if, what if was the refrain of their great song.” In this slim novel, De Robertis sketches a portrait of a man who never stopped fighting for the betterment of himself, his country, and the world.

A timeless and timely exploration of power, revolution, and survival.