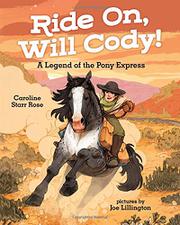 RIDE ON, WILL CODY!

A Legend of the Pony Express

Horses and rider tackle time, distance, and the elements in this tribute to a legendary Pony Express gallop.

As Rose freely admits, “legendary” may be just the word for Cody’s claim to have been a Pony Express rider. Nonetheless, in galloping rhyme she sends him on his way across Wyoming and back in a dawn-to-dawn dash that Lillington illustrates with scenes of the teenager pounding along past buttes and buffalo, through heavy rain, beneath orange and star-speckled skies in turn. It’s a horsey sort of episode, as both words and pictures specify breeds or types with each change of mount along the trail: “Trade a Mustang for a Morgan, / ’Loosa for a Thoroughbred. / Racing, flying, / ever riding, / hurry, hurry on ahead.” A double-page spread that presents eight separate vignettes of Cody on eight different horses as the sky darkens provides effective visual counterpoint to the verse. A final view of the horse and rider wearily finishing their long route as the sun begins to rise once again gives way to a painted portrait of the grown Buffalo Bill resplendent in his buckskins. The author fills in the historical details in an afterword with period illustrations. Human figures in all the pictures are white.

A robust lead-in to Cheryl Harness’ They’re Off! (2002) and other more detailed histories.