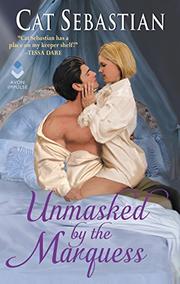 UNMASKED BY THE MARQUESS

Alistair de Lacey, eighth Marquess of Pembroke, is one of the most powerful men in the region and a model of propriety. He has to be to restore the de Lacey family name and legacy. The late marquess was a gambler who loved drink and bad investments. He left behind a mistress, her three daughters, and shaky finances. Alistair, “always correct, but never benevolent,” avoids his half sisters while trying to push his legitimate younger brother, Gilbert, into a very proper career as a clergyman. The appearance in London of Mr. Robert Selby and his beautiful sister, Louisa, rocks Alistair’s controlled world in unexpected ways. Not only does Gilbert fall for the entirely inappropriate Miss Selby, but Alistair is enthralled by her brother’s impish grin. Robert’s laugh, “like the sound of champagne being uncorked, startlingly sudden and bright,” belies a complicated history. Robert was born a foundling named Charity Church and was raised a servant with the Selby family in Northumberland. Sebastian subverts the romance trope of the cross-dressing heroine with a protagonist whose presentation as male is not mere titillation but the authentic self-expression of a non-binary person. Charity/Robert has to learn how to succeed without manipulation and lies, and Alistair must reconsider his definition of moral rectitude and his singular devotion to his reputation. All this is much funnier and sexier than it sounds. While certain aspects of Alistair’s reversal strain credulity, Sebastian (It Takes Two to Tumble, 2018, etc.) has created a world of characters readers will be eager to get to know.

A funny and poignant romance amid a delightful cast of characters makes this a must-read for historical romance fans.