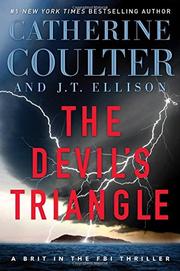 FBI agents hunt for the Ark of the Covenant.

Special agents Nicholas Drummond and Michaela “Mike” Caine are the heads of the new Covert Eyes team, which takes only the most difficult cases. They get a call from their frenemy Kitsune, a famous thief also known as the Fox, who begs their help in rescuing her British husband, Grant, who’s been kidnapped by a pair of psychopathic twins who’d hired Kitsune to steal Moses’ staff from the Topkapi Palace. The staff is a fake, but Cassandra Kohath and her twin, Ajax, part of a family whose lifetime goal has been to find the Ark of the Covenant, will stop at nothing to get it. Now Kitsune’s on the run in Venice, and when Drummond and Caine arrive, they become just two more people the Kohaths want dead to hide not only the secret of the Ark, but also their grandfather’s ability to create storms all over the world. Case in point: he’s just moved a vast amount of sand out of the Gobi, creating a storm in Beijing that could kill thousands. The twins’ mother was working in the Gobi when she disappeared, and they’re sure the ark is buried there. But now that the sand is gone, they find nothing more than part of a golden wing that once covered the chest holding the ark. The three team up in the hope of rescuing Grant and finding the base from which the elder Kohath is using his unusual powers to wreak havoc all over the world.

After all that’s been written about the ark in countless adventure stories, it’s hard to find any new ground to cover. But there are action and thrills aplenty in Coulter and Ellison’s new addition to their Brit in the FBI series (The End Game, 2015, etc.).