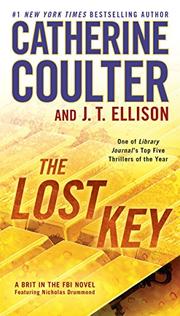 The first Brit accepted into the FBI has had a great deal of previous experience as a spy and Scotland Yard detective; he'd also worked before with the lovely and talented Michaela "Mike" Caine on a joint case (The Final Cut, 2013, etc.). Sent to investigate a stabbing on Wall Street, they never suspect they'll soon be involved in the toughest case of their combined careers. The dead man, Johnathan Pearce, owned a specialty bookstore packed with rare and valuable items. But he was also involved with a mysterious group known as the Highest Order that traces its origins back to Jacobean times. Its membership includes some of the world’s wealthiest and most influential people. Drummond is a computer hacker of rare skill, but so is Pearce’s son, Adam. If they could only find him, Drummond and Caine might discover why his father’s last words were “The key is in the lock.” Drummond is temporarily suspended when he has to kill several thugs and the assassin sent by Manfred Havelock, a German scientist and industrialist whose father was a member of the Highest Order. The mentally unstable Havelock’s company has invented nanotech so advanced that one of his inventions was found in the brain of the assassin. Havelock, who already knows what the key is for, desperately wants to retrieve it. So Drummond, whose own father is also a member of the Highest Order, has to play catch-up. When Havelock’s minions kidnap Adam’s sister to force him to cooperate, Drummond and Caine follow, only to face every imaginable danger before they can unlock the secret and save the world from untold horrors.

A thriller packed with nonstop action, real-life name-dropping and enough cutting-edge science to make you wonder how much of it could be true.