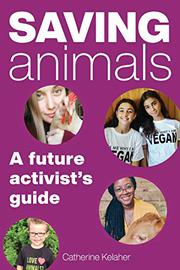 Activist Kelaher rallies supporters for two crusades: rescuing farmed or lab animals and refusing to eat them or use their products.

The Aussie founder of NSW Hen Rescue dishes up a spicy mix of interviews and advocacy to promote the idea that switching to a vegan diet and vigorously opposing any sort of animal use go hand in hoof (paw, fin, claw). Her main ingredients are short Q&A exchanges with budding animal activists around the world but mostly in Australia and the U.S. They are all vegans and mostly teenagers—though some are far younger—who speak about both their favored methods of raising awareness and specific areas of concern, ranging from livestock abuse and slaughter to plastic pollutants, cruelty in the pet industry, wildlife rescue, and classroom dissections. One interesting section presents veganism through the lens of intersectionality. Along with breezy reassurances that any dish can be reinvented as vegan and introductions to some of her own feathered rescuees, Kelaher folds in checklists, a sample press release, and other useful tools. If some suggested activities skate legality’s ragged edge (slapping protest stickers on grocery store shelves or items), at least they’re nonviolent and generally feasible for younger audiences. The few photos that aren’t portraits of interviewees (who are mostly White, with some Asian and Black representation) or healthy-looking rescued chickens are at worst only mildly disturbing. The tone overall is friendly, chatty, and highly engaging.