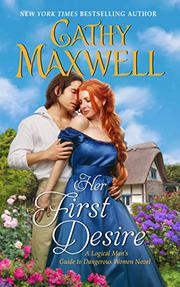 From the A Logical Man’s Guide to Dangerous Women series, volume 2

A steadfast local doctor has to reevaluate his worldview when he makes enemies with a widowed healer.

Gemma Estep lost her philandering husband to a duel and is now at the mercy of his abusive relatives. But when she learns of the death of her beloved uncle Andrew and finds that her boorish brother-in-law purposefully kept the news from her, she finally gets the strength to rebel. Armed with a letter in which Andrew told Gemma to consider his belongings as hers, she cuts ties with her husband’s family and makes her way to Maidenshop, her uncle's village. She hopes that the ownership of Andrew’s tavern, The Garland, will mark the start of a new life. Gemma plans to turn the pub into a tea garden, where she will also sell her soaps and her grandmother’s herbal remedies. But Ned Thurlowe has other intentions. He is determined to hold on to The Garland as a meeting place for the Logical Men's Society, a club meant only for unmarried men. But as Gemma challenges and intrigues Ned with her outspoken personality, and charms the matrons of Maidenshop with her remedies, Ned is forced to take a second look at many of his most strongly held ideas—including his commitment to bachelorhood. The second book in Maxwell's A Logical Man’s Guide to Dangerous Women series offers a powerful commentary on the attitudes and biases associated with women’s bodily discomfort and pain. While the conflict between Gemma and Ned is established with credibility and nuance, their turn toward friendship and mutual affection feels unduly rushed. But Maxwell builds a lovely world, imbuing the varied inhabitants of Maidenshop with distinctive personalities while insightfully illustrating the capacity of women’s communities to heal and empower.

A sweet romance enlivened by a richly detailed and warm setting.