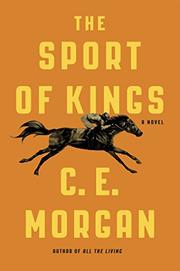 THE SPORT OF KINGS

Morgan follows up her slim, keening debut (All the Living, 2009) with an epic novel steeped in American history and geography.

As a boy, Henry Forge determines to turn the land his aristocratic Kentucky family has planted with corn for generations into a farm for racehorses. Henry grows into an arrogant, hard man, imbued with the unthinking racism and sexism of his haughty father and unnaturally focused on his only child, Henrietta. Before she leaves him, wife Judith loudly voices the novel’s seething strain of bitterness about the lot of women in this world, but her anger is nothing compared to the rage of Allmon Shaughnessy, an African-American man who enters the story in the early 2000s, when Henrietta and he are both in their 20s. Backtracking to trace Allmon’s past, Morgan’s gothic tale of Southern decadence deepens into a searing investigation of racism’s enduring legacy. Allmon’s ailing, hard-pressed mother and her father, a storefront preacher and veteran civil rights activist, are notable among the teeming cast of brilliantly drawn secondary characters who populate the bleak saga of an intelligent, sensitive boy with zero prospects; by the time he’s 17, Allmon is in jail, where he discovers the knack with horses that gets him hired on the Forges’ farm. A few years go by, Henrietta and Allmon become lovers, but there’s little hope of a happy future for such damaged people. A series of five brilliant riffs called Interludes anchor this modern tale in a vast sweep of geological time and the grim particulars of Allmon’s ancestor, a runaway slave named Scipio. The consequences of the Forges’ brutality and pride come home to roost in an apocalyptic climax just after their extraordinary filly Hellsmouth runs the 2006 Kentucky Derby; it’s entirely appropriate to Morgan’s dark vision that it’s not the guiltiest who pay the highest price.

Vaultingly ambitious, thrillingly well-written, charged with moral fervor and rueful compassion. How will this dazzling writer astonish us next time?