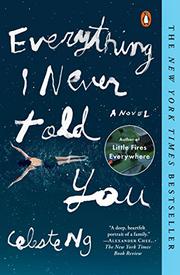 EVERYTHING I NEVER TOLD YOU

Ng's nuanced debut novel begins with the death of a teenage girl and then uses the mysterious circumstances of her drowning as a springboard to dive into the troubled waters beneath the calm surface of her Chinese-American family.

When 16-year-old Lydia Lee fails to show up at breakfast one spring morning in 1977, and her body is later dragged from the lake in the Ohio college town where she and her biracial family don't quite fit in, her parents—blonde homemaker Marilyn and Chinese-American history professor James—older brother and younger sister get swept into the churning emotional conflicts and currents they've long sought to evade. What, or who, compelled Lydia—a promising student who could often be heard chatting happily on the phone; was doted on by her parents; and enjoyed an especially close relationship with her Harvard-bound brother, Nath—to slip away from home and venture out in a rowboat late at night when she had always been deathly afraid of water, refusing to learn to swim? The surprising answers lie deep beneath the surface, and Ng, whose stories have won awards including the Pushcart Prize, keeps an admirable grip on the narrative's many strands as she expertly explores and exposes the Lee family's secrets: the dreams that have given way to disappointment; the unspoken insecurities, betrayals and yearnings; the myriad ways the Lees have failed to understand one another and, perhaps, themselves. These long-hidden, quietly explosive truths, weighted by issues of race and gender, slowly bubble to the surface of Ng's sensitive, absorbing novel and reverberate long after its final page.

Ng's emotionally complex debut novel sucks you in like a strong current and holds you fast until its final secrets surface.