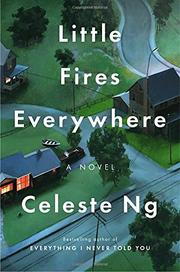 This incandescent portrait of suburbia and family, creativity, and consumerism burns bright.

It’s not for nothing that Ng (Everything I Never Told You, 2014) begins her second novel, about the events leading to the burning of the home of an outwardly perfect-seeming family in Shaker Heights, Ohio, circa 1997, with two epigraphs about the planned community itself—attesting to its ability to provide its residents with “protection forever against…unwelcome change” and “a rather happy life” in Utopia. But unwelcome change is precisely what disrupts the Richardson family’s rather happy life, when Mia, a charismatic, somewhat mysterious artist, and her smart, shy 15-year-old daughter, Pearl, move to town and become tenants in a rental house Mrs. Richardson inherited from her parents. Mia and Pearl live a markedly different life from the Richardsons, an affluent couple and their four high school–age children—making art instead of money (apart from what little they need to get by); rooted in each other rather than a particular place (packing up what fits in their battered VW and moving on when “the bug” hits); and assembling a hodgepodge home from creatively repurposed, scavenged castoffs and love rather than gathering around them the symbols of a successful life in the American suburbs (a big house, a large family, gleaming appliances, chic clothes, many cars). What really sets Mia and Pearl apart and sets in motion the events leading to the “little fires everywhere” that will consume the Richardsons’ secure, stable world, however, is the way they hew to their own rules. In a place like Shaker Heights, a town built on plans and rules, and for a family like the Richardsons, who have structured their lives according to them, disdain for conformity acts as an accelerant, setting fire to the dormant sparks within them. The ultimate effect is cataclysmic. As in Everything I Never Told You, Ng conjures a sense of place and displacement and shows a remarkable ability to see—and reveal—a story from different perspectives. The characters she creates here are wonderfully appealing, and watching their paths connect—like little trails of flame leading inexorably toward one another to create a big inferno—is mesmerizing, casting into new light ideas about creativity and consumerism, parenthood and privilege.

With her second novel, Ng further proves she’s a sensitive, insightful writer with a striking ability to illuminate life in America.