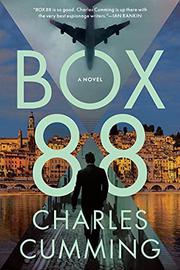 An eerie prologue set on Dec. 21, 1988, recounts the crash of Pan Am Flight 103 over Lockerbie from the perspective of Gaby, a young American passenger who doesn’t survive. Cut to present-day London, where veteran intelligence officer Lachlan Kite receives a phone call telling him that his childhood friend Xavier Bonnard has killed himself. His phone is being tapped by a cadre of MI5 agents intent on ferreting out the significance of Kite’s involvement with the mysterious Anglo-American intelligence group BOX 88. Though their surveillance is comprehensive, the agents haven't reckoned on Kite becoming the target of a surprise attack, but he's soon kidnapped and thrown into a cell by a group of determined Iranians led by businessman Ramin Torabi. Captivity becomes the catalyst for Kite to engage in a soul-searching reevaluation of his life and career. Going all the way back to Kite’s adolescence, author Cumming lays the groundwork for the moral decisions Kite faces in his intelligence career. The unravelling of the events surrounding Xavier’s suicide is a key component of this painful reminiscence. So are the aftermath of the Lockerbie tragedy and the subsequent shocking secrets surrounding BOX 88. Cumming keeps the suspense high; not only is Kite imprisoned, but his captors are threatening his pregnant wife and their family. The plot—anchored in full-bodied portraits of a small cast of characters confronted with the inescapable way the political and the personal are entangled—is intricate but coherent, taking readers down a chilling road of recent history, vividly depicted. The result is a believable plot undergirded by complex characters and profound questions.

The gold standard in espionage fiction.