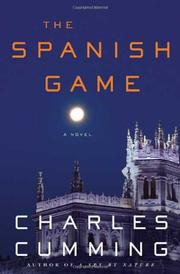 The disappearance of a Basque acquaintance sucks British expat Alec Milius (A Spy by Nature, 2007, etc.) back into the world of espionage.

With money tucked away from his disastrous final year as a spy-in-training, and income from his job as consultant to banker Julian Church, Alec has been able to support himself in some style in his adopted city of Madrid. But the passage of six years has not wiped out his nearly paranoid fear that the CIA and his former British SIS masters would do him in if they ever came across his path. The paranoia ratchets up several notches when Saul Ricken, Alec’s one-time closest friend, turns up in Madrid after having been dumped by his wife. Is Saul just a miserable cuckold, or an agent with an assignment to bring Alec back to Britain and to retribution from the murderous CIA agents he tangled with all those years ago? Alec’s love life is as much on the edge as his spook life. He’s sleeping with Julian’s beautiful wife Sofiá, and the affair is stormy. Both business and private lives take a new turn when the banker sends Alec to the Basque city of San Sebastián to interview Mikel Arenaza, a flamboyant one-time separatist, to find out if the Basque country has calmed down enough to be safe for capital investment. In a long boozy interview, Alec learns a lot about Basque-Spanish politics and some new bits about Julian and his previously unrevealed life in South America. Then Mikel, who’s got a girlfriend tucked away in the capital, fails to make the follow-up session in Madrid. Julian’s discreet efforts to find out what happened to Mikel land him in the thick of a terrorist plot, expose him to the spies he’s been ducking and remind him how much he misses the life of a secret agent.

Intricate, intelligent and, Spanish politics being what they are, occasionally confusing.