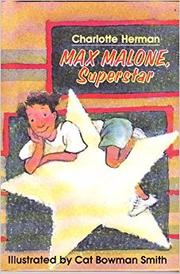 When Max sees the sign announcing auditions for a peanut- butter commercial, he's sure he's a shoo-in. Older sister Rosalie, who takes acting lessons, makes him practice ``spreading, biting, chewing, swallowing, talking, and smiling'' until Max knows he hates ``Peppy Peanut Butter.'' The auditions aren't so great either; nervously, Max decides that his friend Austin Healy has won the part and tells Austin he'll be his manager. Friend Gordy helps out with photos of Austin, but then it turns out that he wasn't chosen. Undaunted, Max learns of an audition for toothpaste, assembles a ``Rezumay'' for Austin, and makes him practice. This time, Rosalie wins, and Max offers to be his sister's agent, too. Touching on children's innocent optimism and their common desire for a little fame, a funny, engaging story for newly independent readers. Illustrations not seen. (Fiction. 7-10)