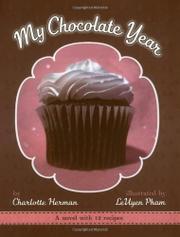 The anticipation of “Sweet Semester,” the fifth-grade dessert-making contest, has Dorrie and her Chicago classmates planning all sorts of recipes. This year, Mrs. Fitzgerald has made the contest more exciting and important by including a fundraiser for children of post–World War II Europe with the promise of newspaper coverage for winners of the best dessert and essay. Dorrie and best friend Sunny try out recipes for several favorite chocolate treats, often with humorous setbacks and unforeseen disasters. But the real tragedy is the news that most of Dorrie’s Jewish Polish family perished in the war with only 16-year-old cousin Victor surfacing from his hidden Holocaust life. Herman’s autobiographically inspired short novel captures the essence of a 1940s Jewish-American lifestyle filled with the love and hard work of an immigrant family determined to reunite with their sole surviving relative. Her lighthearted first-person narration, studded with 12 recipes for successful chocolate desserts, reflects a certain childhood sweetness that evolves into a more poignant understanding of the realities of war and the importance of family ties. Pham’s black-and-white drawings add a nostalgic flavor to the book’s time period and setting. (Fiction. 8-10)