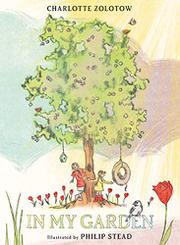 A picture-book update that does Zolotow’s legacy proud.

Stead has carved out a spot in contemporary picture books after years of study of the form. He says as much in his dedication to the late author and editor Zolotow, noting that he began collecting picture books, including hers, as a teenager. His stunning artistic interpretation of this text (first published in 1960) is a triumph in how it matches the writing’s quiet tone without sacrificing visual interest. Historians of the form may find it curious that the original artist, Roger Duvoisin, is not acknowledged except on the copyright page. But perhaps there is a visual tribute: Like Duvoisin, Stead illustrates a black cat, unmentioned by the text, who accompanies a young child (who appears white) through the seasons and the garden. Stead adds a woman (also white-appearing) to the illustrations, perhaps the child’s mother or grandmother, whose presence enhances the sense of wonder and quiet delight in the spreads. Her kindly ways offer steady assurance that this child is safe and beloved while exploring the world. What’s more than that, the woman clearly nurtures the child’s love of nature, as when she hangs a birdhouse while the child’s first-person narration reads “in the spring what I love best in my garden are the birds building nests.”

A picture book to love best in all seasons.