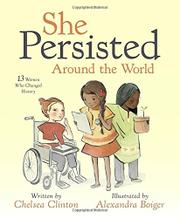 SHE PERSISTED AROUND THE WORLD

A scope-broadening companion to She Persisted: 13 American Women Who Changed the World (2017).

Arranged in their subjects’ birth order (though frequently without any dates), the brief tributes focus on the achievements of selected women from countries other than the U.S. Activists’ causes include the right to an education (Sor Juana Inés de la Cruz, Mexico, and Malala Yousafzai, Pakistan), environmentalism (Wangari Maathai, Kenya), anti-war protests (Leymah Gbowee, Liberia) and women’s suffrage (Kate Sheppard, New Zealand, whose cause included Maori women). Marie Curie gets a nod for her two Nobel prizes, Egyptian Aisha Rateb for her trailblazing legal career, and Joanne “J.K.” Rowling for Harry Potter. Brazilian soccer star Sisleide “Sissi” Lima do Amor is the one athlete in the lineup. The roster is, overall, both racially and nationally diverse—though as Chinese-American dancer Yuan Yuan Tan has spent most of her life in this country, East Asia seems underrepresented. Personal detail is so skimpy that, for instance, readers will have to infer from context that Canadian civil rights activist Viola Desmond was a woman of color. Clinton does note that astronomer Caroline Herschel was barely 4 feet tall due to a childhood disease, and following an early accident, pioneering Indian doctor Mary Verghese worked from a wheelchair. Each entry appears with a visionary quote and, from Boiger, fluidly brushed watercolor portraits of the subject as a dignified adult and also, often, a child. There is no backmatter to guide inspired readers to further information.

“So, speak up, rise up, dream big,” Clinton urges—but, again, offers only tantalizing glimpses of women who did that.