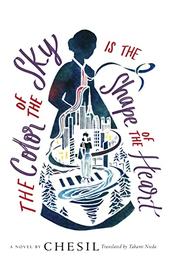 THE COLOR OF THE SKY IS THE SHAPE OF THE HEART

by Chesil ; translated by Takami Nieda

A young woman caught in between worlds reconciles with her history.

“The sky is about to fall. Where do you go?” It’s 2003, and first-person narrator Pak “Ginny” Jinhee considers high school—along with the world at large—“a cruel place.” Descriptions of a sensitive “invisible boy in class” and her sole friend, Maggie, who is deaf, along with Ginny’s poignant observations of people’s shoes (her own “the most worthless”) echo her earlier life and experiences. As a marginalized, mistreated Zainichi Korean from Tokyo, she “bounced around” between schools, moving from Japan to Hawaii before landing with an American host mother in Oregon. Ginny’s existential troubles stem from her visceral intolerance of injustice and self-proclaimed revolutionary tactics. Compact chapters set a brisk pace, punctuated by family letters from North Korea and a scene in the format of a play that flesh out a collective history and entrenched prejudice against Koreans in Japan. The narrative pivots between Ginny’s fragments of memory and her current dilemma in the U.S.: whether to exert academic effort or embrace expulsion. Flashbacks to junior high Korean school where she discovered “an unshakable freedom,” despite not entirely fitting in or knowing much Korean, detail events compelling Ginny to leave and show how “an invisible thirty-eighth parallel line was drawn in Japan too.” This complex, layered story, originally published in Japanese, reaches a cathartic conclusion once Ginny resolves to catch the proverbial sky as it falls, thereby forgiving herself and claiming her agency.