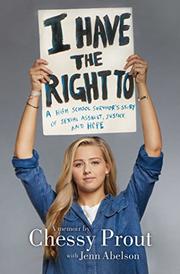 I HAVE THE RIGHT TO

As a 15-year-old, Prout was sexually assaulted at an elite New England boarding school, a crime that would make the national news before she made the decision to go public with her identity and reclaim her story.

Prout takes readers behind the headlines in this candid and inspiring memoir of her assault and subsequent journey to justice and healing. After a childhood in Tokyo with her biracial (Japanese and white) father, white mother, and two sisters, Prout joined her older sister at St. Paul’s, where a social system based on privilege and status allowed misogyny to flourish unchecked. As a freshman, Prout was raped by a popular senior boy who took her on a “Senior Salute,” a ritualized school tradition wherein seniors tried to “score” younger students before graduation. Prout recounts her traumatic experience and its prolonged aftermath—the bullying and ostracization she endured upon her return to St. Paul’s and the well-publicized trial—in honest and gut-wrenching detail. Prout acknowledges her privilege as a “white, straight, blond-haired girl from an upper-class family” that supported her unconditionally and explains that she wants to use her voice to help create a culture in which all survivors of sexual assault can feel empowered to speak out.

Powerful, essential reading for all high school and college students, parents, and educators.