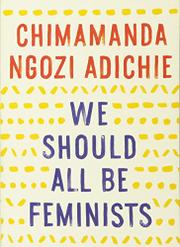 WE SHOULD ALL BE FEMINISTS

An enchanting plea by the award-winning Nigerian novelist to channel anger about gender inequality into positive change.

Employing personal experience in her examination of “the specific and particular problem of gender,” National Book Critics Circle winner Adichie (Americanah, 2013, etc.) gently and effectively brings the argument about whether feminism is still relevant to an accessible level for all readers. An edited version of a 2012 TEDxEuston talk she delivered, this brief essay moves from the personal to the general. The author discusses how she was treated as a second-class citizen back home in Nigeria (walking into a hotel and being taken for a sex worker; shut out of even family meetings, in which only the male members participate) and suggests new ways of socialization for both girls and boys (e.g., teaching both to cook). Adichie assumes most of her readers are like her “brilliant, progressive” friend Louis, who insists that women were discriminated against in the past but that “[e]verything is fine now for women.” Yet when actively confronted by an instance of gender bias—the parking attendant thanked Louis for the tip, although Adichie had been the one to give it—Louis had to recognize that men still don’t recognize a woman’s full equality in society. The example from her childhood at school in Nigeria is perhaps the most poignant, demonstrating how insidious and entrenched gender bias is and how damaging it is to the tender psyches of young people: The primary teacher enforced an arbitrary rule (“she assumed it was obvious”) that the class monitor had to be a boy, even though the then-9-year-old author had earned the privilege by winning the highest grade in the class. Adichie makes her arguments quietly but skillfully.

A moving essay that should find its way into the hands of all students and teachers to provoke new conversation and awareness.