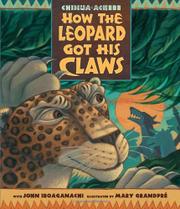 HOW THE LEOPARD GOT HIS CLAWS

When the dog's coup deposed King Leopard, the former ruler of the animal world exiled himself, returning with claws and sharp teeth of his own to govern by terror instead of with his previous gentle kindness.

This literary fable by the internationally eminent Achebe (based on a story by Iroaganachi and including a poem by Christopher Okigbo, killed in Nigeria’s civil war), reflects the secession and return of Biafra in the late 1960s. First published here in 1972, it has been beautifully re-illustrated by GrandPré, famed for her Harry Potter covers. These lush acrylic paintings have both texture and depth. Presented full-bleed across two pages or in rough rectangles set on white space, with bits extending beyond the edges, they tend to be dark and crowded with animals, whose expressive faces and bodies support the action. Each spread includes a decorative band of sharp triangles, a tooth-and-claw motif. Halfway through the story, the dog and not-yet-armed King fight fiercely, each glowing with orange battle heat. The conclusion explains the harshness of the jungle and the bond between dog and man, a satisfying ending for young readers unlikely to know or be ready for the political background.

Whether read as a fable with African roots or as an allegory, this is a handsome treatment of a memorable tale.