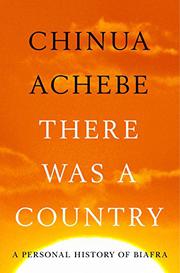 THERE WAS A COUNTRY

A Personal History of Biafra

The eminent Nigerian author recounts his coming-of-age during the now scarcely remembered civil war of 1967–1970 that sundered his country.

An Igbo by birth and heritage, born into a deeply Christian family in 1930, Achebe (The Education of a British-Protected Child: Essays, 2009, etc.) grew up at a time when British colonial rule was at its orderly zenith and educational institutions in Nigeria were first-rate. These schools turned out the imminent Nigerian leaders and pioneers of modern African literature, who would assume power and position as Nigeria marched to independence in 1960. Yet within the vacuum left by the departing British, Nigeria became “a cesspool of corruption and misrule,” with the numerous ethnic groups vying for power, especially the dominant Igbo in the east, the Yoruba on the coast, and Hausa/Fulani in the north. The Igbo were increasingly resented and persecuted for their education, competitive individualism and industriousness. The coup of Jan. 15, 1966 was ostensibly led by Igbo military leaders and was countered by bloody assassinations six months later, followed by pogroms against the Igbo by northerners. Igbo refugees flooded the Eastern Region, which refused to recognize the Nigerian government led by Lt. Col. Yakubu Gowon; the consensus was building across the East, led by Col. Odumegwu Ojukwu, that “secession was the only viable path.” The East was declared the Republic of Biafra on May 30, 1967, with the full backing of the Constituent Assembly and the best Igbo minds of the time, including Achebe. The arrangement proved disastrous, as Gowon aimed to crush the insurrection at all costs, starving Biafra by blockade and creating a global humanitarian disaster that killed an estimated 3 million, mostly children. Achebe looks at all sides of the conflict, inserting poems he wrote at the time and tributes to Nigerian writers and intellectuals.

A powerful memoir/document of a terrible conflict and its toll on the people who endured it.