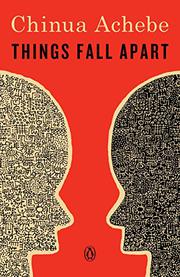 Written with quiet dignity that builds to a climax of tragic force, this book about the dissolution of an African tribe, its traditions, and values, represents a welcome departure from the familiar "Me, white brother" genre.

Written by a Nigerian African trained in missionary schools, this novel tells quietly the story of a brave man, Okonkwo, whose life has absolute validity in terms of his culture, and who exercises his prerogative as a warrior, father, and husband with unflinching single mindedness. But into the complex Nigerian village filters the teachings of strangers, teachings so alien to the tribe, that resistance is impossible. One must distinguish a force to be able to oppose it, and to most, the talk of Christian salvation is no more than the babbling of incoherent children. Still, with his guns and persistence, the white man, amoeba-like, gradually absorbs the native culture and in despair, Okonkwo, unable to withstand the corrosion of what he, alone, understands to be the life force of his people, hangs himself. In the formlessness of the dying culture, it is the missionary who takes note of the event, reminding himself to give Okonkwo's gesture a line or two in his work, The Pacification of the Primitive Tribes of the Lower Niger.

This book sings with the terrible silence of dead civilizations in which once there was valor.